Brenda Shanahan and her team launch the 2019 campaign 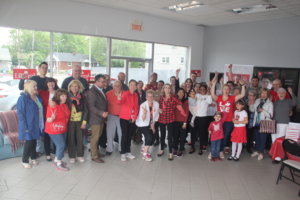 Chateauguay, September 11th, 2019 – Incumbent Member of Parliament for Châteauguay-Lacolle, Brenda Shanahan, and her Liberal team launched the 2019 election campaign with enthusiasm. Proud of her achievements and the record of her government, the candidate is excited to deliver the positive message of the Liberal Party of Canada in anticipation of the October 21st election.

Brenda Shanahan has been working on her second term re-election for several months – she was nominated last winter and her campaign office officially opened mid-June.

The Liberal candidate has been pleased to serve as an MP in the past four years, working on the ground and listening to the people. “Every week, I participate in community activities held all over the 15 municipalities in the riding. Along with my staff, I also organized more than 20 consultations and roundtables for local stakeholders on a variety of issues, often in collaboration with my fellow South Shore MPs,” she states.

Brenda Shanahan is proud to have announced federal investments of more than $7 million in about 150 organizations, businesses and municipalities in Châteauguay-Lacolle. “Whether in the area of ​​infrastructure, innovation or economic development, our government has made a difference in our community by stimulating the economy and improving residents’ quality of life,” she says.

While serving as an MP, Brenda Shanahan left her mark in Ottawa by being deeply involved on Parliament Hill and within the Liberal caucus. “I had the opportunity to fulfill different responsibilities, such as the Quebec Caucus Vice-Presidency and the Women’s Caucus Vice-Presidency. I also proposed a few initiatives, including the launches of Financial Literacy Month and the creation of the Society of Parliamentary History,” she adds.

Brenda Shanahan believes that the Trudeau government has set the conditions to build a strong economy that benefits everyone. “After the decade of cuts of the previous government, we chose to make smart investments in the economy and in Canadians. Since 2015, one million jobs have been created, the unemployment rate has reached an  historic low, 826,000 people have been lifted out of poverty and 900,000 seniors are enjoying a safer retirement,” she illustrates.

Several measures have helped to achieve these positive results, including the Canada Child Benefit, tax cuts for the middle class and small businesses, as well as the improvement of Old Age Security and the Guaranteed Income Supplement.

According to Brenda Shanahan and Team Trudeau, protecting the environment and tackling climate change are the challenge of our generation. “In 2019, those who do not have an environmental plan do not have any plan for the economy or for the future. There is still work to do, but we have already taken action to ensure the energy transition and make our world cleaner,” she points out, citing as examples the investments in clean technologies, transport electrification and the conservation of nature.

“We invite Canadians to move forward with a progressive, inclusive government that bases decisions on science and that promotes hope, rather than division, mistruths and fear,” she concludes.

Photo: Many supporters participated in the official opening of the campaign office, located at 66 St-Jean-Baptiste Blvd. in Chateauguay.